The origin of glow powder(1)

Glow powder composition that is calcium fluoride, such as the watch glow; can also use pigments mixed with glass microbeads, soft light can form a total reflection of the glow results! You see the road signs on the highway in the dark, or perhaps the red and white outside the drawing line of a power pole, the practice will be the latter and not the real fluorite. glow powder in practice that is fine glow stone powder, glow pearl is a block of relatively large spheres.

The glow powder is fluorescent powder luminescent pearl in our modern official alias "luminescent wall, luminescent stone, put light stone" is said to be the world's very rare black night can retrieve the light of the strange stone. Some experts point out that the "glow pearl" is actually the fluorite that can shine. Our country is a fluorite deposit country, but not many fluorite can glow at night, so it is valuable and priceless. 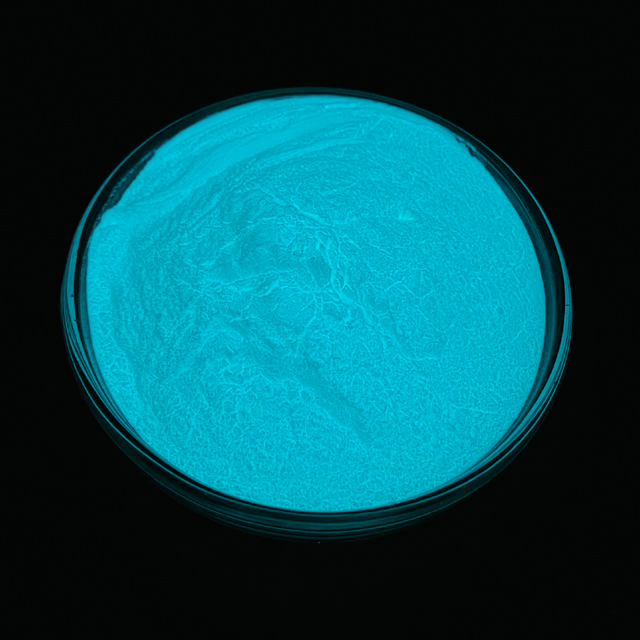 The British logical scholar Joseph Lee in the huge book "China's history of superstitious craft" recorded that modern Chinese people like the night pearl, that is, because they think the night pearl has a spiritual nature, is the treasure of the town. So everyone looks at it as a precious treasure. It can calm the house, can remove all the danger. It can always keep the whole family safe and bring good luck to people. Some people in India call the night pearl "snake-eye stone", and the Japanese scientist Reiji Toshi called the night pearl a noble gemstone in 1916.

What kind of stone is the night pearl? The ancient and modern Chinese and foreign sayings are quite different. According to some experts, the glow pearl is not as mysterious as some people have been advocating, but several special minerals or rocks, which are processed by everyone to become round pearl-shaped. The light retrieved by the glow pearl is not as legendary as the myth that "the Dragon Palace is illuminated as if it were daylight".

However, after receiving heat energy (light or boiling water), it will recover bright light. In the dark room or dark night where you can't see your fingers, put it in the higher natural temperature to appreciate it, after 10 minutes, we can clearly see it in the center of half a foot away from it, and it will gradually and automatically recover the vibration and excite the people's spirit, like a bright moon.

Why the night pearl in the dark night will take back a stronger and beautiful light? There are many different opinions on this. Some gemologists think that because the fluorite component of the glow pearl is mixed with arsenic sulfide, so there is a "spirituality", and the daytime onset of these two materials "activator" to the night is to release energy, and made into a brilliant glow. And can be in a certain period of time continuous glow, and even forever glow.

After the test, such as night pearl daytime without daylight, the night is glow time is late, and vice versa is faster, whether the activator of activation in the display of spirituality? This is to see the wisdom of the people. The above is only a sector of expert opinion, not necessarily thorough and accurate. Night pearl there are many secrets, so far has not been recognized by the experts, but the glow material in the end what is the reason, so far is not very clear. To sum up: the night pearl is still not completely lifted a thousand-year-old mystery.